Roeland and Lucca kicked-off the SRO tests for 2020.

In half an hour, a 20-acre plot was searched by this team. An unknow number of helpers made this a realtime excersise. Highly motivated, independent and quickly Lucca found the so-called missing students and their lecturer and pointed Roeland to them with consistent barking.

Secondly, Ellen and Homme had their turn. 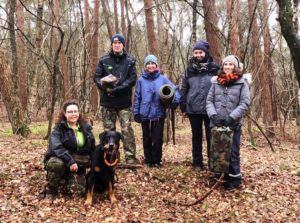 Homme was appointed a 12-acre plot and also an unknown number of helpers not known to him. Homme found them quickly and pointed Ellen to the victims by means of his Norse bringsel.

Many thanks to the ladies acting as victims during the excersises.